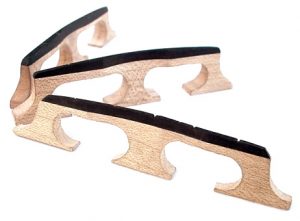 is at the heart of making your banjo work and it is the real key to your banjo’s sound. No doubt you are aware of the vast differences that different bridges can make. Through my thirty plus years of building bridges, I still marvel at that fact.

Nechville makes bridges to the highest standard of care and professionalism. We consider every aspect of bridges imaginable, such as mass, shape, grain orientation, density and chemistry to arrive at the absolute best answers for most banjo players.  While it is not always an easy or obvious choice, consultation with a Nechville rep often leads to a relatively inexpensive overhaul of your banjo’s sound and playability. It may be that something as simple as a bridge customized to your banjo is the best thing you can do for your money.
Before ordering any bridges from Nechville, you are advised to learn all you can about bridge selection and banjo setup. Through the storehouse of knowledge available through our website, you increase your chances of selecting the right bridge. You may learn just enough to finally make the perfect decision on what kind of whole new banjo might be in your future. Watch Nechville postings and website events calendar for upcoming events where our knowledgeable reps can help you in person.
THE ENTERPRISE BRIDGE…
is the result of many years of research and experimentation. When starting out, I had no clue how difficult it was to create a great banjo bridge. Happily, I persevered in my quest and today the compensated Enterprise Bridge has worked its way onto many of the world’s best banjos. Made from hand selected and properly dried Maple and ebony, it’s the only bridge made available in so many various weights and heights between 9/16 and 7/8″ and from 2-3 grams. Let’s take a close look at the bridge’s function and break down all the important features that we consider in making the Enterprise bridges for optimal performance.
HOW BRIDGES WORK
A bridge placed between vibrating strings and a banjo head transmits small pressure variations at the frequency of the note being played. If you imagine the movement of a string during just one cycle of vibration (which normally occurs hundreds of times a second), the down and forward pulling pressure of the bridge on the head is greatest as the string’s fundamental main swinging arc reaches its greatest distance away from the string’s still position. At the peak amplitude of the string, the head is pushed in and the air in front of the banjo is slightly stretched out.
We will call the string’s resting position zero. As the string passes by zero, the downward and forward pressure on the head is temporarily reduced, allowing it to raise slightly causing a compression wave in the air. The string swings to the other side to once again increase the pressure on the bridge, resulting in perpetuating waves of compressed and decompressed air that our ears hear as sound.   When you consider that the bridge  also rocks back and forth as well as riding up and down in reaction to a vibrating string, the motion of the head becomes more complex and is able to communicate much more sonic complexity.
All strings vibrate in the fundamental way mentioned, but simultaneously also in harmonic sections of 1/2. 1/3. 1/4. 1/5th and so on of the string’s length. You can actually find all the notes of a chord built from the main note of the string when you listen the harmonic content of a string’s vibration.
COMPOSITION
Obviously, a bridge can be made out of anything but through experience we have learned that medium density woods with a good stiffness ratio tend to work the best. The top edge of the bridge is normally made from ebony for creating a durable surface for the strings to rest upon. Too much ebony will increase weight and stiffness of a bridge, which tends to mute some of the high overtones,  decrease volume, and add sustain.
In my opinion, weight of banjo bridges should always be between two and three grams. At the two gram end, you will find a “Grassy” tone with a quick staccato attack and swift decay. You will be able to hear a lot of harmonic content to the notes, and the sound will be bright to your ears. At the three gram end, the sound will be much richer, because of muted high harmonics less punchy attack but more sustain. The right weight for you will likely fall in the 2.5 area. The most common bridge wood is medium density maple. The wood must be well dried, and of sufficient density to arrive at the target weight without having to thin the bridge down too much.
WOOD GRAIN ORIENTATION
All wood has annual growth rings that affect the wood’s stiffness and also the resulting sound from a bridge. The first and probably most obvious specification is that the entire length of the bridge needs to run with the direction of the wood grain. That means that end grain will appear at each end of a bridge. When viewed from the end, you should be able to see the faint lines of growth rings.
The number of growth lines in not as important as their orientation in the finished bridge. These annual growth lines must run as closely as possible to parallel to the banjo head surface. You might imagine correctly that the resistance to a sagging motion might be optimized by having the growth rings in vertical (perpendicular) orientation to the head. This may be true, but the banjo likes the bridge to have some degree of flexibility across its length. The sound is noticeably better from a bridge with flat-sawn (parallel) grain orientation.
SHAPE IS CRITICAL
In my experience, I’ve learned that the size and shape of the bridge will greatly affect the resulting sound as well as playability. 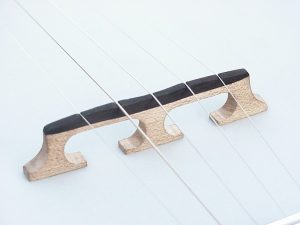 Thin bridges are normally not ideal. They often sag and cause playability issues. Thin bridges will also dig into the head more, sit lower than a bridge with a wider footprint and generally have a harsher tone.   I like having 1/4″ or so of width contacting the head. The bridge should taper up very gradually as to have a sufficiently sturdy top thickness.
Most bridges are exactly flat across the top and flat across the feet. You may notice that guitar bridges are made to allow a bit higher action on the bigger strings to avoid buzzing strings. For this reason, we can keep playability lowest on the strings that we often do lead playing on.
The resulting shape for ideal action on every string is a bridge top that bows upward toward the center, leaving the third and fourth strings a tad higher. For every change in height or thickness, you must remember the overall target weight between 2-3 grams and choose density of materials accordingly.
CORRECT FOR INTONATION
The next concern that crops up is the intonation issue. When you install a bridge with the previously mentioned arched top edge, the higher third string will gain noticeably extra sharpness since it must travel farther when being pushed down to the fret. Without a compensated scale on the 3rd string, it is impossible to find a spot on the head where every string frets in tune with its harmonic chime at the 12th and 19th fret. Even without the arched top shape, the third string is still prone to go sharp when fretted compared to the other strings due to its thickness.
The simple answer is compensation. A longer scale for just the third string needs to be shaped into the bridge by design, creating the compensated and radiused shape of the Enterprise bridge.  The wound fourth string needs less help due to its thinner core.
SMILEY BRIDGES?
There is some talk about shaping the feet of the bridge to fit a along parabolic curve so that the down pressure on the bridge will cause less sagging. It is my finding that an optimally tightened head requires no such radius, but very slight relief sanded toward the outer parts of the feet is routinely done to even out the pressure on all three feet of the bridge.
What can and does happen with too much curvature of bridge feet is that it temporarily concentrates the pressure on the center foot, but does nothing to prevent further sagging and eventually causes a permanent sag in the head where the bridge sits which can diminish the potential amplitude of the banjo.
IN SUMMARY
I’d like to suggest that you use this information in your own bridge making adventure. We have successfully made bridges out of different woods and in totally different shapes with success. My recent experiments with wood roasting and use of rare exotics have produced some exciting new material possibilities, inspiring me to write this comprehensive article. We at Nechville continue to be there to serve your every banjo need.
Stay Tuned! Tom