First I thank my travel mates Al Price, Rick Sampson, Tedd Williams and Lawrence Levine. What a fun crew to hang with. We stayed at the main hotel connected to the convention center. Since the World of Bluegrass moved to Raleigh, the city itself has extended the atmosphere of Bluegrass into the streets. So that even on our occasional walks outside for coffee or meals, we were constantly breathing air filled with Bluegrass.

The immersion experience reminded me of our stays at the Executive Inn in Owensboro, Kentucky more than 2 decades ago. Problems and realities of everyday life were temporarily suspended for a week while we lived in a comp 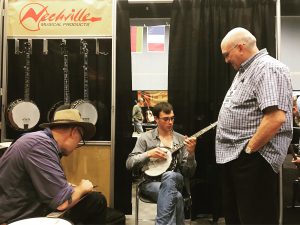 letely different world of music. Not just any music, but the kind that is hand-made on the spot between good friends from all around the world.

Of particular joy to me as a supplier of instruments was hearing the results of my labor. I saw and heard how more and more musicians are noticeably refining their sound with instruments that I have built or set up. Ryan Murphy with Old Salt Union sounded great on his Phantom. Matt Menefee rocked with David Greer. Tim Carter his Bang Bang Band showed their stuff. It was great hanging and jamming with Eric Yates from Hot Buttered Rum, a very entertaining San Francisco group. I also met another young band called the Plate Scrapers with Derek Kreitzer on his newly set up Classic.

Other notable highlights included Molly Tuttle with Wes Corbett on banjo and Mile 12 with Catherine BB Bowness and her tasty style. Silvio Ferretti and his group Red Wine has a fantastic new CD that they were promoting, just one of a growing number of International bands appearing at IBMA. The Carivick Sisters from the U.K. were there with Charlotte’s new banjo playing husband John Breeze. John is an old friend, active in the British Bluegrass scene. 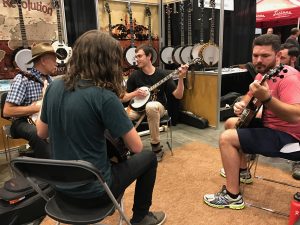 It is a week worth trying to attend if you have never experienced it. Agents, promoters and professional musicians can’t miss the early week business conference and trade show networking opportunities. The jammers and fans have plenty of chances through the weekend to participate in some spirited live music all around the town of Raleigh.