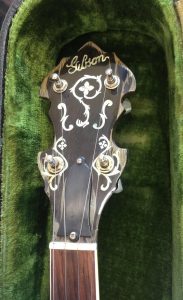 Having played a lot of banjos in my day, when I have an instrument like this, I have to write about it.  Well actually, there are no other banjos like this. Let me explain.
The Nashville flood of 2010 marked the end of the Gibson banjo era. Not only did Gibson lose their banjo shop, but countless instruments were caught underwater and lost. One such casualty was a nice Greg Rich replica of a pre-war RB3. When received as a down payment on a new banjo, I thought it was a total loss. But after scraping off the mud and wiping it down I found that the pot was salvageable. The neck connection was degraded badly by water damage and the neck angle was unsuitable. 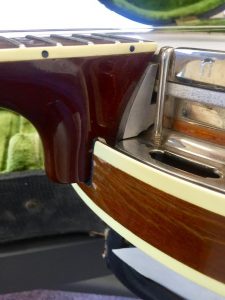 Flux Capacitor comes to the rescue. It is possible to re-cut an existing banjo neck to accommodate the patented Flux connection. That’s what we did. Within a few hours with a bit of fret dressing and cleaning up, the banjo was back in playing shape again with perfect action.  The swelling and subsequent drying of the rim did not hurt the tone. In fact I was surprised from the outset how nice it sounded. Besides the addition of the Flux Capacitor, I decided to keep all the original parts including the bridge that came with it, until recently.  I expected the RB 3 to sell quickly in a consignment shop but after a year or two of not selling, I got it back and brought it to Rockygrass this year.
What a great festival to meet with and jam with top level pros. The Nechville demo session display is a natural gathering place for the festival’s finest pickers. That is where a banjo that looks and sounds like a pre-war Gibson gets plenty of attention. I admit it was fun on two occasions telling the player that it was an original flathead, to which both players responded, “Yup, you can tell, it has that special pop when you hit it.”
I eventually told the truth and offered the banjo at my quick sale price, only to pop the bubble they were floating in. 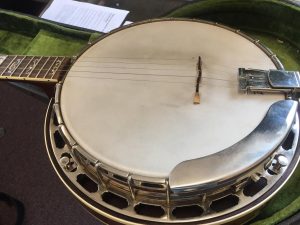 With all the attention that banjo was getting, I began wondering how good it might sound with a compensated Enterprise Bridge. Let me tell you, no matter how good you think your banjo sounds, you owe it to yourself to try a well crafted compensated bridge like this on your banjo. Before the Gibson sounded traditionally great with that slight gnarly sound typical of Gibson Banjos. No one would complain but I much prefer the purity of sound offered by the Helical mount banjos.
The bridge changed everything.  With a tad more mass and slightly higher third and fourth strings and perfect compensation on each fret, the tone seemed to clarify instantly. All the twang and snarly sound disappeared. It sounded pure like a Heli-Mount with a slight sparkle and lots of depth.
This got me thinking about what I really had in my hands. I realized that this is a banjo with a story that you could write a book or 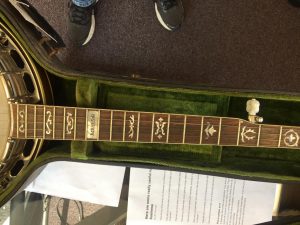 movie about. Once belonging to Nashville Picker Billy Robertson, you can only imagine the pre-flood scenes that banjo has experienced. The resurrected version of this banjo came back as a pre-war clone. The perfect finish aging marks on the peghead, the finish cracks and missing lacquer on the rim, the perfectly shaped comfy neck, the rosewood fingerboard and antique style pearl inlay all spoke from antiquity of its desire to play again. And the voice of this banjo is the real convincing element. Of the numerous Flux conversions we have done at Nechville, this one ranks as the most dramatic and I think my favorite as to sound.
As a side note for those unfamiliar with the Flux system, this modification gives the neck a much more stable anchor point, increases the surface area of the connection and provides an easy way to adjust the angle of the neck for successful use of any height bridge or any string action preference without causing undue stress to the pot. This stabilizes the pot and allows a fuller tone. Another big advantage is that the Flux makes the neck instantly removable for travel or easy transport.
The only banjo of its kind to have been resurrected from the 1000 year flood of 2010 symbolizes a historic convergence of Nechville technology (Nechtology) with the tine honored role of the traditional banjo.
Inquiries about ownership of this collector piece can be directed to me [email protected] or call 612-275-6602. The banjo comes in an antique case and written certification as an official historic Nechville re-creation.