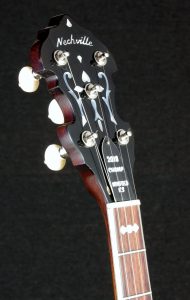 The Walnut Valley string instrument competitions in Winfield Kansas attract the world’s best pickers. The winner of the banjo contest will have his or her pick of banjos from three American builders. The first place winner’s choice will signify another competition between the banjo builders themselves, as the winning contestant chooses what he/she considers to be the best banjo of the bunch.

For their first year of sponsorship at Winfield, Nechville has created an irresistible prize banjo including all the features most commonly sought after in a modern made professional instrument. The result surprised even the makers.

The Renaissance Vintage restates the classic beauty of the “Golden Era” of banjos with refinements that have come to predominance only in recent times. Maintaining the essential ingredients of genuine old growth mahogany neck, authentic antique rosewood fingerboard, classic looks, pre-war formula tone ring and combining many of the advancements popularized by Nechville over the past 30 years, has given the world a new standard by which to judge banjo excellence.

The resulting combination is an example of refinement and aesthetics. The full width five string compound radius neck and Comfort Beveled armrest give effortless playability. The fifth string peg is repositioned on the peghead, so the neck is more sleek with better stability. The tonal character is complex, with warmth and volume attributed partly to the block style mahogany rim.  The intonation is perfected by Nechville’s Enterprise radiused compensated bridge. The fullness and depth are characteristics of Nechville’s Helical Mounting construction. In every respect, and in every detail, the Renaissance Vintage welcomes the challenge.

Good luck in the competition!