The favorite part of my job is getting to travel and meet new pickers. I met Andre Dal several years ago at the European world of Bluegrass in the Netherlands and continue to run into him at La Roche France festival and other banjo related events in Europe. I am particularly impressed with his love for the music and his perseverance through a number of setbacks in his playing career. 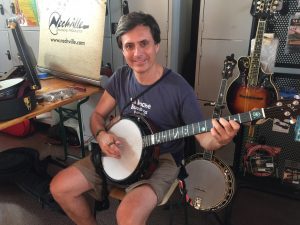 Andre Dal first got mesmerized by bluegrass banjo after listening to the Deliverance soundtrack, featuring Eric Weissberg. Like many banjo players today, Andre got hooked by the fun, hard driving sounds of Bluegrass.

After starting on the guitar, the banjo quickly became his obsession. Andre started to learn the banjo when he was studying in London, in 1997. In the following years after initial lessons from a Portuguese musician he met Gerry Rolph in southern Portugal. He was a pioneering bluegrasser in England, back in the 1960s and, fortunately for Andre, he moved to Portugal. He took lessons with him and eventually bought one of his banjos, a Gibson RB-75 J.D. Crowe, mahogany model. Gerry set Andre on the lifelong course of studying and playing banjo.

In 2007, Andre began a yearly pilgrimage to the European World Of Bluegrass (EWOB) festival in Holland (now it’s called Voorthuizen Bluegrass Festival) and became the only Portuguese member of the European Bluegrass Music Association. In 2009, he gave up his geological engineering job and went to work for his family’s restaurant giving him more freedom to play. His band (Stonebones & Bad Spaghetti) was formed that same year and they started to play at festivals around Europe and England. Over the years, Andre shared venues with such great names as Tony Trischka, Bill Keith, Ross Nickerson, Pete Wernick, Jens Kruger and others but still aspires to perform in the United States.

After years of intense practicing, Andre developed a physical condition known as Focal Hand Dystonia. That condition nearly forced him to quit playing but in 2011, he decided to change fingers and started to use his 2 middle fingers and thumb for 3 finger picking. He invented a device to prevent his index finger from moving and after repeated attempts to return to using the usual fingers, he perseveres with his new approach and continues to improve. His ability to play is not the same as it used to be but he compensates with lots of energy and clever adaptation. For Andre, the joy of playing overshadows the need for perfection.

When coming to Portugal on vacation, various bluegrass players have made their way to André’s family restaurant to be welcomed with a jam. During a visit by American musician, Dave Badgade, a song was recorded for his debut album, History in My Hands. Andre also spreads the bluegrass spirit with a monthly bluegrass session in Lisbon.

In May of 2018, Andre’s maple Deering Tenbrooks Saratoga Star banjo, purchased in 2014, was stolen. He’s been looking for it locally and on the internet but until now, no luck. 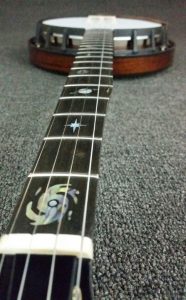 Being without a banjo resulted in further degeneration of his condition until he decided to buy a maple Galaxy Phantom from Nechville. Having developed an earlier friendship with me, Andre was familiar with the Nechville features of easy set up, safer travel, great sound and wonderful looks. That helped make it an easy choice for replacing his Tenbrooks.

Now, in Andre’s words, “I’m really happy I went for a Nechville banjo. On the first day, I took the neck off and set it back together. Never before in 20 years I did that on my other banjos.” As Andre likes a bright banjo sound, he is able to pull that off easily with Nechville’s even head tensioning system. He says “It’s easy to change the action too, anyone can do it.”

Right in-line with Nechville’s desire to unite the planet in musical friendships, the Phantom won Andre’s heart. “I’ll be playing it for years to come at festivals, jams and concerts,” he boasts.

Nechville spreads the Banjo Revolution online at www.nechville.com and through worldwide travels at festivals and workshops.